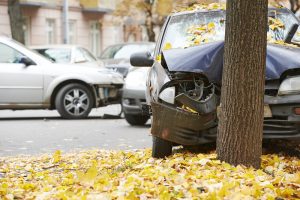 Drivers traveling on Massachusetts highways and interstates often face the frustration of being stuck behind a slow driver. When traffic laws permit, as indicated by a dashed white or yellow line between the lanes, drivers are allowed to pass other vehicles on the road. Drivers must be prudent and use caution when attempting to pass. However, because the presence of a dashed line alone does not mean that it is safe to pass. A fatal Massachusetts car accident recently occurred when two vehicles attempting to pass another vehicle collided with each other, slid off the roadway and struck trees.

According to a local news article reporting on the recent crash, two vehicles were involved in the crash on Route 391 near Chicopee. The two vehicles were traveling southbound in the center lane when they each crossed the dashed white line into the left lane to pass another slower vehicle in the center lane. After completing the pass, one of the vehicles lost control and struck the other vehicle, causing both vehicles to spin out of the traffic lanes, across the right shoulder, and into the heavy vegetation. Both vehicles struck trees at dangerous rates of speed, and the drivers were pronounced dead at the scene.

Passing other vehicles is one of the most dangerous actions to be taken on the road. All drivers involved in a pass or in the proximity of other drivers attempting to pass should be mindful of the dangers. Passing is legal in Massachusetts when there is a single dashed yellow or white line dividing lanes on a roadway. A dashed yellow line divides single lanes from oncoming lanes, and passing should only be attempted if there are no other vehicles in the oncoming lane and visibility is sufficient to overtake any vehicles safely. Dashed white lines divide traffic going the same direction, but vehicles should only attempt to pass other vehicles if the maneuver can be completed at a safe speed and control of their vehicle can be maintained. If multiple vehicles are passing at the same time, the drivers should allow sufficient space between themselves to prevent a multi-vehicle accident if one of the cars loses control.

A negligent driver who performs a dangerous pass and loses control or causes a collision can be held accountable for any injuries or damages that resulted from the crash through a Massachusetts negligence lawsuit. A qualified accident attorney can help victims determine what relief they are entitled to and what parties should be held accountable for their loss.

Have You Suffered Injuries Because of a Dangerous Driver?

If you or someone you love has been involved in an auto accident and suffered injuries or died, the attorneys with the Neumann Law Group can help. Our lawyers are experienced with all types of negligence cases, including Massachusetts car accidents. We help accident victims obtain the compensation they deserve without all of the headache and stress of dealing directly with insurance companies or courts. Our office accepts Massachusetts car accident cases, as well as other injury cases such as slip-and-falls, defective products, medical malpractice, nursing home abuse and negligence, and wrongful death. We have negotiated substantial settlements in highly fact-intensive and complicated cases, and we pride ourselves on getting our clients the compensation that they deserve. Contact our office at 800-525-6386 to schedule a free initial consultation with an experienced attorney at our law firm.