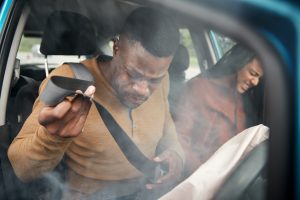 Massachusetts car accidents can cause serious injuries and damages to anyone in the vicinity of the collision. However, passengers are often particularly vulnerable as they have very little control over the driver’s actions. Moreover, passengers are typically unable to escape a potential collision, unlike bikers and pedestrians who might have the ability to quickly move out of harms’ way. After an accident, passengers can recover damages from the at-fault party, even if they were a passenger in the negligent driver’s vehicle.

While the law permits recovery against the at-fault driver, passengers are often left in a precarious position, especially when the passenger and driver are friends or family. Passengers fear that filing a claim or lawsuit against their loved one or their insurance provider will impact that person’s premiums. However, this line of thought can leave an injury victim without the critical funds they need to recover from an injury. However, an attorney can assist victims in understanding all potential avenues for relief and how best to achieve their goals.

Drivers should take steps to protect all road users, including their passengers. The failure to do so can result in serious injuries and fatalities. For example, a Massachusetts news report recently described a harrowing incident that took the life of a drunk driver’s passenger. According to the report, police responded to the accident scene where they discovered a rolled-over vehicle. Police explained that the small SUV rolled over into a gully on an infield between the exit ramp and road. After toppling over several times, the car stopped upside down in a flooded area of the gully. Troopers extricated the vehicle’s passenger, but he died shortly afterward. The vehicle’s driver was transported to the hospital but was released. Police indicated that the driver was intoxicated at the time of the accident, and he admitted that he consumed alcohol before the incident. The driver was charged with several offenses, including felony motor vehicle homicide and operating under the influence of liquor.

Although passengers may feel concerned about their relationships when pursuing a claim, they must contact an attorney as early as possible. It is also important to remember that the insurance company, not the at-fault driver, is responsible for covering an accident victim’s costs in most cases. Further, the failure to meet the state’s statute of limitations can result in the inability to file a lawsuit and recover necessary damages. In Massachusetts, injury victims generally have three from the date of the crash to file a lawsuit against the responsible party.

Have You Suffered Injuries in a Massachusetts Accident?

If you or someone you love has suffered serious injuries or died in an accident, the attorneys at the Neumann Law Group can help. The Massachusetts car accident attorneys at our office have extensive experience handling sensitive and complicated lawsuits. We handle claims stemming from Massachusetts car, truck, and boat accidents, premises liability, defective products, and wrongful death. Our attorneys provide clients with respect, compassion, and zealous advocacy to ensure that injury victims recover the compensation that they deserve. Contact our legal team at 800-525-6386 to schedule a free initial consultation with an experienced injury attorney at the Neumann Law Group.