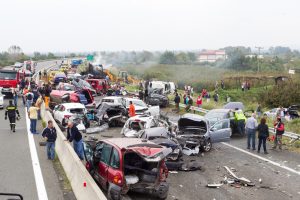 When a car accident causes injuries, the period directly after that accident can be crucial. Oftentimes, injuries can worsen at the scene of a crash, and medical personnel need compliance from everyone involved in the accident to be able to give injured parties their best chance at receiving quick and substantial care. Because of this reality, Massachusetts drivers must stay at the scene of the crash until their legal duties have been fulfilled. If they fail to meet their legal requirements, injuries can worsen, and at times, passengers can die. This is one of the reasons that lawmakers have made hit and run accidents a crime.

Recently, a driver in Massachusetts was arrested after he tried to flee the scene of a crash in Duxbury. According to a local news report, the man was driving in the evening, around 10:00pm, when he struck the guardrail on the side of the highway. This initial collision caused a chain reaction crash in which three other cars swerved in order to avoid hitting the original driver. All four vehicles were affected by the accident.

One of the car’s passengers was seriously injured. Two other passengers faced minor injuries, and all three injured individuals were brought to the hospital to be examined after the accident.

The driver who fled the scene, said state police, was soon found, arrested, and brought to the hospital with minor injuries. The driver is now facing multiple charges, which include leaving the scene of a crash causing personal injury and negligent operation of a motor vehicle.

In Massachusetts, leaving the scene of personal injury is considered a crime. According to Title XIV of the Massachusetts General Law, if a driver knowingly gets into an accident that causes injuries and then flees the scene of the accident, he or she has not met the necessary legal requirements. At a minimum, drivers who cause accidents must stop and give any other drivers their information, and when they fail to meet this bare minimum requirement, they can indeed be sued by anyone who was injured by the accident. However, the fact that a driver fled the scene of an accident will not automatically make them liable for any resulting injuries; an accident victim still must prove the elements of a personal injury case. Thus, anyone who was involved in a serious Massachusetts car accident should immediately consult with an attorney.

Are You in Need of a Massachusetts Car Accident Attorney?

For many people, the time after a Massachusetts car accident can be particularly difficult. With injuries and emotional trauma, it can be hard to figure out what options might exist moving forward. At the Neumann Law Group, we are here to help. We are a group of Massachusetts car accident attorneys with extensive experience handling all types of personal injury lawsuits, including car accident claims. Our attorneys are familiar with how the courts work and they understand how to give you the best chance at recovering the damages you deserve. For a free and confidential consultation with one of our lawyers, give us a call at 800-525-6386.