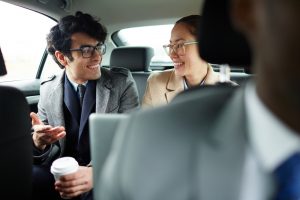 Those who travel by car understand that there is a certain level of risk that driving entails, because, despite safe driving habits, motorists cannot control the behavior of other drivers. However, in some cases, drivers can modify and adapt to traffic conditions to ensure their safety or mitigate their harm. In contrast, passengers usually maintain a total lack of control to avoid an accident. Those who suffer injuries as a passenger in a Massachusetts car accident can file a lawsuit against the responsible parties. In some instances recovering compensation is more straightforward for passengers because they usually do not share liability for the accident.

Massachusetts law provides passengers with rights and remedies if they suffer injuries because of another’s negligence. In effect, passengers maintain the same rights as the non-negligent driver, and in some cases, they have additional rights. Generally, a passenger in a car accident may be able to sue the at-fault driver for damages. Further, if the driver of the vehicle the passenger was traveling in was responsible, that driver may be held liable as well. In essence, a passenger can file a lawsuit against any responsible party that contributed to the accident or damages.

Passengers can suffer serious injuries in an accident and deserve to recover compensation for their losses. For example, a Massachusetts news source recently described a devastating accident that took the life of a motorcycle passenger. The woman was a passenger on the back of a motorcycle when the bike left the road and crashed into a ditch. The woman was ejected and died upon impact.

Have You Suffered Injuries in a Massachusetts Accident?

If you or someone you love has suffered injuries or died in a Massachusetts car accident, contact the Neumann Law Group. Our firm has over 200 years of combined experience representing injury victims in their claims for damages. We handle Massachusetts personal injury claims stemming from boating accidents, bus accidents, car accidents, dog bites, medical malpractice, mass torts, nursing home negligence, pedestrian accidents, and premises liability. We provide our clients with an individualized case approach, ensuring that we understand their concerns. Our attorneys have recovered significant amounts of compensation on behalf of Massachusetts injury victims. Contact our office at 800-525-6386 to schedule a free initial consultation with an attorney on our legal team.