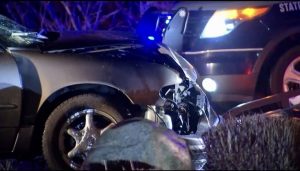 Operating a vehicle while intoxicated by alcohol or impaired by other substances is one of the most dangerous behaviors that a driver can engage in. DUI-related accidents cause many deaths on Massachusetts roads each year, and hundreds are injured because of the reckless conduct of drunk drivers. Nobody is safe from the hazards of drunk driving, as is demonstrated by a local news article discussing a recent DUI-related crash that left a Massachusetts State Trooper hospitalized.

According to the local news report, the state trooper was driving home from work at 11:30 PM in Marshfield, when another driver crossed over the center line and crashed into the trooper head-on. The trooper was hospitalized with non-life-threatening injuries and was released the next morning. The driver of the other vehicle, a 20-year-old man from Marshfield, was questioned by police after the crash, where he appeared intoxicated. After failing several sobriety tests and admitting he had drank alcohol earlier in the night, the man was arrested and charged with a DUI.

In addition to the criminal liability for DUI, and even assault, that drunk drivers may face after an accident, they also are subject to civil liability for their reckless conduct. When a DUI accident causes injury or death, accident victims are able to pursue a civil personal injury claim against the at-fault driver. Because driving under the influence or while impaired is a crime, civil liability for a drunk driver who causes an accident is relatively easy to prove. Although liability may be easy to prove, that doesn’t mean that insurance companies will be willing to pay out the damages that a victim is entitled to.

Car accident claims can include many types of damages from a crash. Some damages include what is spent to fix a vehicle, medical bills, lost wages, disability reimbursement, as well as compensation for pain and trauma. Accident victims may struggle to negotiate with insurance companies to collect all these damages, as the companies are quick to find any reason to deny a claim. With the help of a skilled Massachusetts personal injury attorney, an accident victim stands a much better chance of getting the compensation that they deserve.

If you or someone you know has been injured or killed in a Massachusetts car accident, consultation with a qualified personal injury attorney can make the difference in your claim. Insurance companies have highly skilled legal teams on their side, whose job is to help the insurance companies deny or reduce claims. The experienced Massachusetts personal injury attorneys of the Neumann Law Group aren’t afraid of insurance companies, and we know what works in negotiating and advocating for our clients. With our help, you can have real confidence that your case is being handled properly. We handle Massachusetts car accident cases, as well as other injury cases such as slip-and-falls. Contact our firm at 800-525-6386 to schedule a free consultation and discuss your claim today.