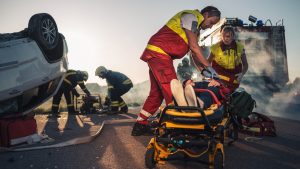 When a car accident happens, on top of dealing with one’s own injuries suffered from a car crash, it can be difficult to understand state-specific laws that dictate how to bring a civil lawsuit to recover damages for your injuries. Victims of car accidents should consider filing insurance claims and when to do so, how to prove that the defendant was negligent, and any defenses the defendant may try to raise, to name a few factors. There are many other factors that must be considered and that must be considered in a timely fashion.

A recent news report provided details about a major accident that occurred in Wrentham, Massachusetts. Six people, including adults and children, were transported to local hospitals with serious injuries after a multi-vehicle crash that shut down a Massachusetts highway. Crash reconstruction analysts determined that a 66-year-old Plymouth woman was southbound on Route 1 in a Jeep, while simultaneously, a 2003 Honda CRV operated by an 18-year-old Wrentham woman was traveling on the northbound side. As the Jeep approached a motel, the driver of the Honda attempted to turn left toward the motel lot. The Jeep’s front end came into contact with the right rear of the Honda.

After a car accident, to hold someone liable for the injuries suffered as a result of the accident, the plaintiff has the burden of proving that the accident was caused by that other person’s negligence. In the state of Massachusetts, there is a three-year statutory limitation, or in other words, a three-year deadline for filing most car accident lawsuits in civil court. Additionally, in the state of Massachusetts, there is a no-fault system that requires filing insurance claims before pursuing legal damages against another party.

Find the Right Help after a Massachusetts Accident

If you or someone you love has been involved in a car accident in Massachusetts, contact the experienced attorneys at Neumann Law Group today. The Neumann Law Group has dedicated lawyers who represent clients in many Massachusetts injury cases and help clients navigate difficult decisions when it comes to lawsuits, including how to navigate comparative negligence defenses that may be raised. Our firm has successfully secured substantial settlements and won significant verdicts for our clients. Contact us today at 800-525-6386 to schedule a free consultation with Neumann Law Group.